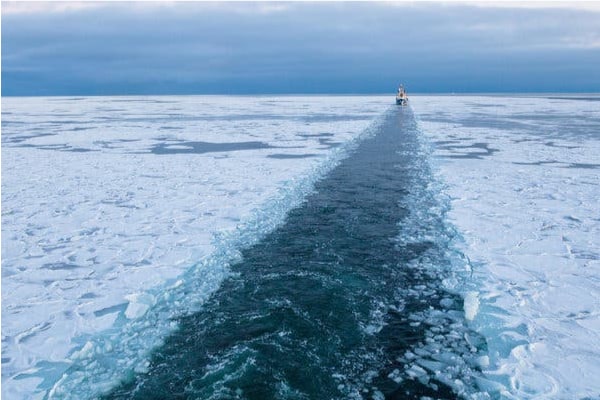 Climate change, a topic hot on the agenda, has been the cause of a new controversy; it’s increasingly opening up the Northwest Passage, an Arctic sea route north of the Canadian mainland.

Since the 19th Century, explorers have been attempting to utilise this Transpolar passage as a shortcut between the North Atlantic and the North Pacific. However, now, as the arctic ice retreats due to global warming, the passage is becoming an economically viable solution. In 2014, the Nunavik became one of the first cargo vessels to traverse the passage from Canada to China. The journey took 26 days in comparison to the 41 days via the Panama Canal; the efficiency-related benefits are clear.

But what does this ultimately mean for shipping? And although it is becoming a solution, is this solution not an indicator of a wider problem that maritime needs to address?

Shipping accounts for approximately 3.1% of annual global CO2 emissions according to the Third IMO GHG Study. Shipping emissions are predicted to increase by 150% if other sectors were to decarbonise successfully. This is a huge impact on the current climate problem, and can be somewhat accountable for the retreating ice. Therefore, when presented with the opportunity to exploit a new shipping route partly created by these huge amounts of pollution, it’s important for maritime to consider the effects this will further have…

…And that’s what many shipping companies are now doing. Mediterranean Shipping Co. are one of a growing list of major carriers and logistics providers who are taking a stand against the notion of utilising this new route due to fears that commercialising it will result in more environmental damage. MSC, following CMA CGM and Hapag-Lloyd, have determined the Northern sea route is out of bounds and have instead eschewed the commercial benefits of another Asia-North route option, which is 30% shorter than the southern route via the Suez Canal. The disappearance of Arctic ice is, as Diego Aponte, president and CEO of MSC group states, ‘profoundly disturbing’.

However, others hold a different view on the new route. Firstly, in a world where time is becoming increasingly the difference between profit and loss, the Transpolar Passage could prove enticing. This is why companies such as Maersk haven’t ruled out the passage completely, but have rather stated it is not ‘currently seen as a viable commercial alternative to existing routes’. Canada itself has also wanted to quickly reap the benefits of this new route, since the passage is surrounding the country, it’s claims to territory have become clear.

The Canadian government claims that waters within the Canadian Arctic Archipelago, among some surrounding waters, are internal to Canada, giving them right to bar transit through the passage. However other nations, particularly the US, are arguing that the passage lies in international waters and that these claims are ‘illegitimate’. Although long contested, the passage has a very strong and geographic connection with Canada. But this means the potential to enact fishing, environmental, ship safety, and fiscal regulations on the space against other nations and their ships.

The route is, therefore, at the brunt of a multitude of controversies, ranging from moral to regulatory. It’s unsure at present who will control and what will be a deciding factor on the route’s viability, but it is clear what needs to be taken into account when establishing a decision.

We and our partners use technologies such as cookies, and we process personal data, such as IP addresses and cookie identifiers, to tailor ads and content to your interests, to measure the performance of your ads and content, and to gain in-depth knowledge of the audience that saw the ads and the content. Click below to agree to the use of this technology and the processing of your personal data for these purposes. You can change your mind and change your consent options at any time by returning to this site.
I AGREE
PRIVACY POLICY
PREFERENCES
Cookie Box Settings
Cookie Box Settings
Decide which cookies you want to allow. You can change these settings at any time. However, this can result in some functions no longer being available. For information on deleting the cookies, please consult your browser’s help function. Learn more about the cookies we use on our Privacy Policy page.