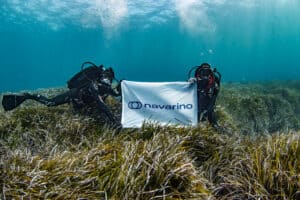 Hellenic Centre for Marine Research – Underwater Communications System
We were very proud to offer our support to the Hellenic Centre for Marine Research in the form of an underwater communications system, much to the delight of their diving team scientists (as the photograph clearly shows!) Their ecology team from the Institute of Oceanography carries out scientific dives as a means of studying and monitoring the state of the coastal marine environment, often working in remote locations around the Greek territories and abroad. Navarino provided the team with a complete set of underwater communications equipment, which allows them to be in direct contact with their surface support team in case of an emergency, as well as to better plan of underwater activities, making their important scientific work both safer and more productive.

Homeless Hostel Support
KODEP (Piraeus Municipality Social Company), this winter arranged for more than 20 homeless citizens to stay in a warm, clean local hostel rather than the cold streets of Piraeus. In October a hotel in Athens which was closing down offered to donate its entire stock of furniture to the hostel, if someone was willing to pay the significant transportation costs. Navarino stepped in, helping to furnish the hostel with modern, functional furniture to help ensure the homeless can live comfortably and happily. Additionally, Navarino joined KODEP’s new European social program called “Work & Home”, thanks to which 22 families were offered a place to stay as well as a job by the municipality of Piraeus, in order to help get their lives on track again. We were proud to be able to contribute to special Christmas dinners which were prepared especially for every family. their future.

Action Aid Tech Gifts
Action Aid is one of the world’s most well-known organizations, working towards a world free of poverty and injustice. It was founded in 1972, when 88 UK supporters sponsored 88 children from India and Kenya with a safer environment to live in and to receive an education that would bring a better life for them and their communities. Over the years, Action Aid’s goals broadened to include gender equality and several other societal and environmental challenges. Their operations in Greece are aimed at assisting those who are living in poverty and empowering them with tools to enable them to enter the professional world. Navarino contributed 10 tablets and 5 laptops to assist their work, hopefully helping some people to get ahead in their lives.

Greek Navy Underwater Demolition Team Equipment Donation
In late November our CSR Department and Mr Panos Tsikopoulos were invited to the Greek Navy Seals’ (formerly known as OYK) training grounds. After an enlightening tour of the premises, we had the opportunity to meet with theSeals commander who informed our colleagues of the challenges that their force faces. As a result, to help out we procured the teams some special armored protection plates for their vests, helping those who look after us all to stay a bit safer while doing so. 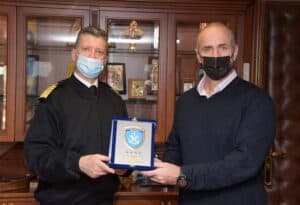 Port Police Headquarters Video Conference System
Last spring, the Navarino CSR Dpt. worked with the Greek Port Police central command, in order to identify ways of upgrading their communication systems. As a result, we helped them to acquire a specialized video conference system that enables their central command to communicate in real time with all the port police stations around the country, 24/7, which Navarino helped them to establish and operate over the autumn. Chief Vice Admiral Kliaris personally thanked our cofounder Mr. Panos Tsikopoulos (photo) for the initiative, pointing out that it is a bright example for the shipping industry.

Dell International & Navarino Action Team Beach Cleaning Event
On November 7th 2021, Navarino’s Action Team joined forces with a team from Dell International, to help clean up a stretch of shoreline near Elefsina. In summer the beach we visited sees a lot of pedestrian traffic and as a result had become heavily littered with rubbish and waste. After a few hours of strenuous work, our
joint effort with Dell managed to gather 1.700 Kg of waste, filling more than 60 large garbage bags, as well as removing heavy maritime ropes and 3 large truck
tyres. We wish to thank the Dell team for their excellent support and hope that other environmentally sensitive companies will join us in our future efforts to make our environment a little better.

The Smile of a Child Santa for the Moschato House
Our support for the largest children’s institution in Greece (particularly for their Moschato House, which cares for 30 children) continued in July when we provided a defibrillator for their premises, followed by two training seminars in using it to help Safeguard against any immediate medical emergencies. During Christmas we undertook the role of “Santa Claus” for the children, answering their letters to Santa with gifts which were accompanied by a handwritten card from Navarino staff members adding a personal touch of care to the young ones at Christmas time.

Larissa Nursing Home
Dimotiko Girokomeio, from the “Angels of Joy”, a team of charity artists that visit hospitals to bring joy to sick children. Larissa’s Dimotiko Girokomeio is a nursing
home in a 1960’s establishment that was donated to the city by prominent Larissian families, with the purpose of housing the elderly from the region. Today, its capacity is for 100 individuals but because of the pandemic it has been restricted to 60, along with 27 personnel.

The house is not state funded, so it struggles for income to cover costs and consequently, it has not been able to cope with many basic needs such as heating and air-conditioning. We believe that cool temperatures during summer and heat during winter should not be considered a luxury for elderly people who are at a vulnerable time in their lives. As a result, we were happy to be able to donate two large air-conditioning units with inverters so that this winter and the upcoming summer will find its residents with much better temperature conditions and hopefully more comfort. 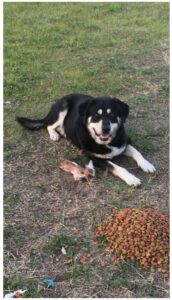 Vive Vitta Animal Shelter
Our 35 little friends living in the Vive Vitta animal shelter under the love and care of Mrs Hannelore near Levadia, had their premises upgraded in September after we helped to pave the entrance and perimeter of the shelter. Navarino had arranged for this operation which, according to Vive Vitta, made a world of difference to the shelter’s daily dog walks as well as to their care and maintenance. We continue to support the shelter with food and medical support throughout the year.