Navarino Action Team – Clearing Ymittos mountain of fallen branches
In April, the Navarino Action Team were invited to help by Philodassiki, an organization which cares for the Ymitos mountain flora and provides a multitude of wildlife services and activities. 2021 saw an incredibly rare snowfall across Attica, pointedly named Medea after the mythical Greek sorceress, which brought with it many problems for wildlife. In this instance, a large number of fallen branches in the olive garden area of the mountain had fallen and littered the terrain. This not only made the mountain difficult to access but proved to be a significant risk for future fire danger. Despite the rain, Navarino Action Team helped clear the area whilst spending quality time in nature. Navarino has also sponsored 8 new trail signs. 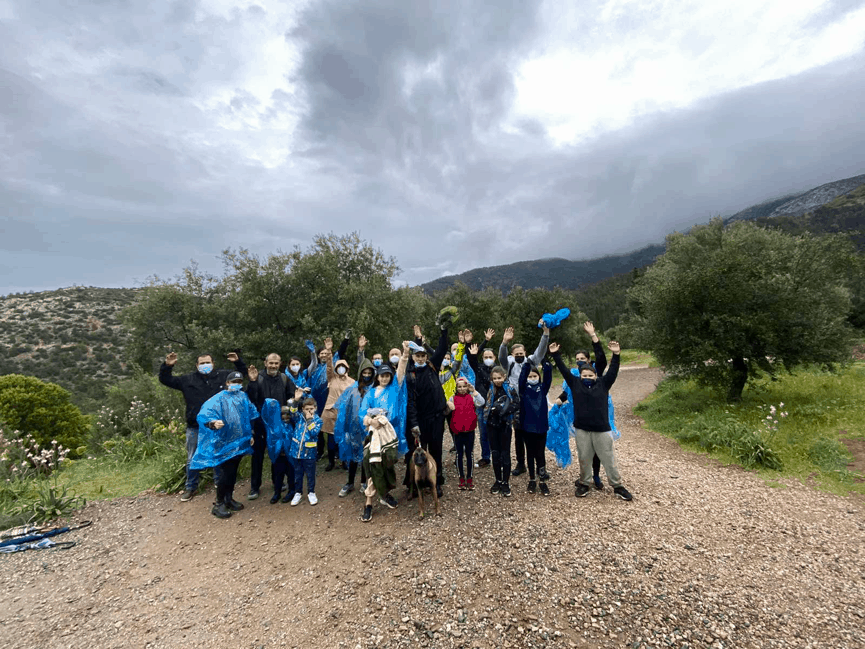 The Smile of a Child
The renowned Greek charity, The Smile of a Child, is known for giving hope to those who experience a problematic start to life. During its twenty years of operation, the charity has helped more than one million children across Greece. As the charity grows to support more vulnerable children, so too does its need for resources. Last year, Navarino were able to provide necessary apparel to their ‘Moschato House’, whilst this year we have been able to provide equipment such as tablets, laptops, and projectors to ensure the children can stay connected to school during the pandemic. We also hope that providing such technology will help the children find their passions, explore the world online and create dreams for their future.

Alzheimer’s Society UK
Many of us understand the difficulties that Alzheimer’s disease presents. It’s prevalence across society is one that creates a desolate feeling of isolation for those impacted. The Alzheimer’s Society is the UK’s leading dementia charity, working to alleviate patient symptoms and offer support to relatives. The charity campaigns for change, funds medical research to find a cure, and supports all those affected. Our UK office interaction with Alzheimer’s Society meant we learned that, after twenty years of research, a new drug has been approved and is now in use, with many encouraging signs to patients in their early stages. We hope that Navarino’s small contribution to this effort will help in the fight against dementia. 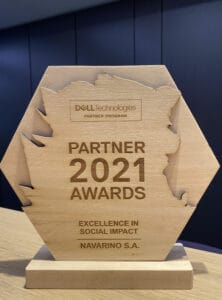 Dell International Social Impact Award
The Dell Sustainable Goals for Societal Change are a set of goals pervading four areas; advancing sustainability through recycling; cultivating inclusion to benefit from the power of diversity; transforming lives through their sphere of influence; and upholding ethics and privacy. Since the creation of our CSR department, Navarino have been able to take onboard many CSR actions and support a plethora of organisations, which has led to Dell awarding Navarino with their Social Impact Award – chosen from from all of their South Eastern European partners. Mr Panos Tsikopoulos, the driving force behind all our social actions, received the award on Navarino’s behalf via an online ceremony. All of us at Navarino are proud to receive this award which has propelled our commitment to ensure our efforts continue more strongly than ever.

EDASA Fire Monitoring
We are celebrating over one year of our pledge of support to the EDASA – the group of firefighter volunteers who monitor Parnitha’s forest. Parnitha is an unfortunate hotspot for fire outbreaks and the EDASA provides essential work to detect and suppress such wildfires, as well as working on the reforestation of Attican mountains, while supporing State firefighting services that deal with forest fires on mountainous terrain. On this occasion, Navarino provided specialized helmets and masks to help them keep up their vital work.

KODEP Van Sponsorship
Navarino is privileged to have sponsored another worthwhile cause, the Piraeus social services or Public Benefit Municipal Enterprise of Piraeus i.e KODEP offers a range of social welfare services and programs for those citizens of Piraeus most in need. This is especially important during the current global health crisis. 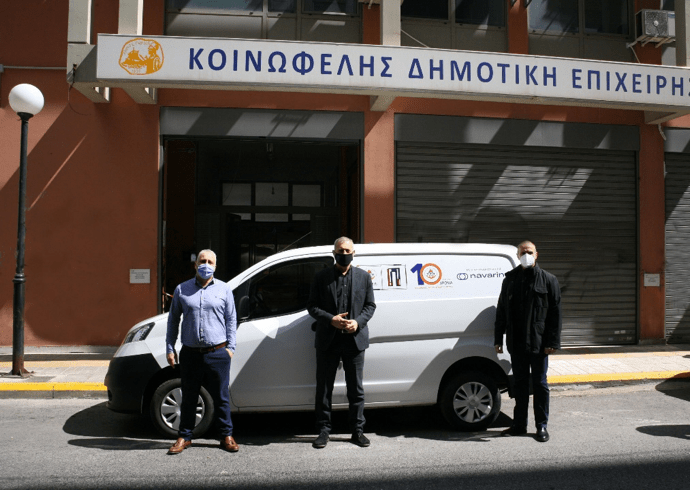 Our sponsorship is in the form of a van which will be used for the distribution of necessities to the homes of the most vulnerable groups of Piraeus, which KODEP have been carrying out since almost the beginning of the health crisis, and for the last 10 years. The handover ceremony was attended by the Mayor of Piraeus, Mr. Moralis, the President of KODEP, Mr. Voidonikolas, the co-founder and one of the shareholders of Navarino, Mr. Panos Tsikopoulos. 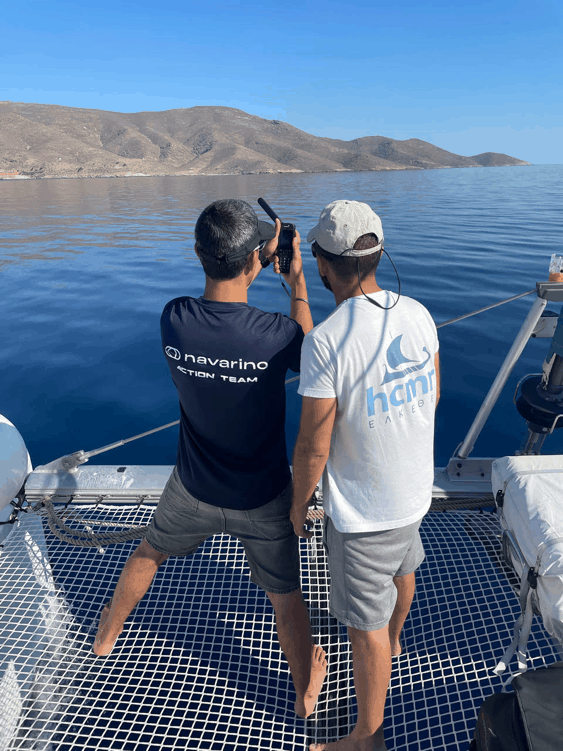 Hellenic Centre of Marine Research Satellite Phones
March presented Navarino with the opportunity to meet with the president of the Hellenic Centre of Marine Research (HCMR) and learn of the multitude of areas in which it operates. After learning about the various areas of the HCMR’s work, Navarino found the most impactful way in which to support their operations would be by providing two satellite phones for the diver’s team, who are based in Attica and Crete. The satellite phones allow them to stay connected no matter where the divers are located at sea. We wish all the best to such a significant cause and we look forward to supporting them further in future.

Navarino Action Team – Faliro Beach Cleaning
With summer approaching the Navarino Action team took part in a beach-related CSR activity. At Faliro beach the members of the team took part in a two hour ‘first aid by sea’ seminar, learning vital life saving first aid skills. Following this, the team worked on cleaning the beach, removing almost 400 kg of waste, and in the process shedding light on just how problematic pollution at the beach can be. Our team will continue their efforts, wherever and whenever necessary. 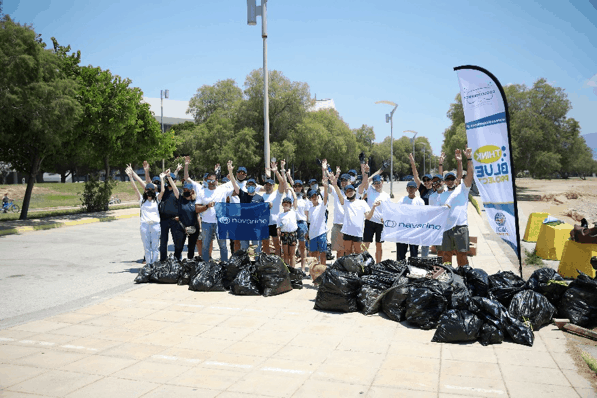 Angels of Joy
Angels of Joy are a very unique group of artists, who’s stages comprise of hospitals and children’s / elderly people’s homes. They are young actors, singers, and dancers that use their talents to entertain and provide joy to people in need, wherever they are being treated. Their ability to bring some entertainment to those in need and creating happy moments during some challenging periods of life, is something we very much value and we felt compelled to support such a touching cause by helping with all the technical requirements of the group to ensure they can seamlessly continue their important work. 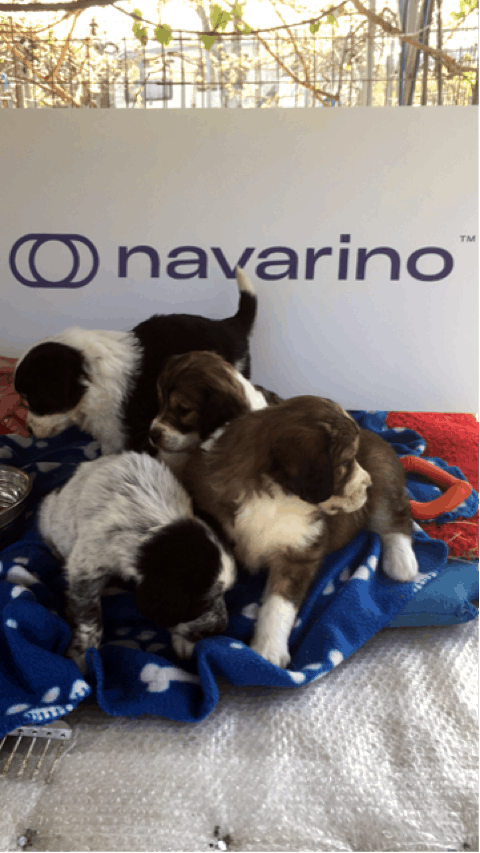 Vive Vita Dog Shelter
A close friend of the Tsikopoulos family drew their attention to a dog care facility located near Livadeia city. Vive Vita is the lifetime project of Mrs Hannelore, an Austrian / Greek citizen who has dedicated the last 30 years of her life to the rescue and wellbeing of stray dogs 24/7. Her momentous efforts and dedication to such a cause are something that could not be ignored and Navarino have assisted by arranging for vaccinations, shelter enhancement, food and medicine – something which we will continue to do going forward.