Driving around the world during a pandemic. Navarino-sponsored expedition continues despite challenges. 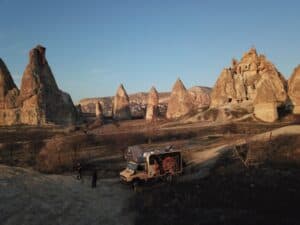 Akis Temperidis is well known to Navarino. In 2007 he began an extraordinary trip to drive around the world in 800 days, for which Navarino provided connectivity. Now he is on the road with Navarino again, in another round-the-world expedition that he hopes will inspire cultural understanding and raise awareness of the benefits to be had from a simpler, nomadic lifestyle that respects nature. In this interview, you can read the story of his latest adventure so far.

‘It was mid-September 2019 when we left Greece to take this trip around the world, starting from the Balkans. Three months later we crossed the Turkish border, hopeful to follow the historic Silk Route in central Asia and arrive in Mongolia, presumably at the beginning of this summer. According to our initial plans we should be now somewhere between China and SE Asia, although magically and unexpectedly we are exploring the arctic zone in Scandinavia and we have just arrived at North Cape on the 71st parallel. 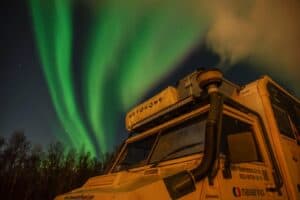 We were deep in Anatolia, heading to Georgia and Armenia, when the pandemic closed all the borders in central Asia and most countries started to lockdown their populations in order to pull the handbrake on the covid-19 outbreak. Border closures made us feel like prisoners in our own vehicle, as we couldn’t go anywhere and felt like we were in a dystopian novel for our generation. It was like a third world war feeling, especially when we crossed the already closed Greek border and drove on isolated roads back home. Greece seemed as if it had been hit by a biological bomb then.

Then it was the lockdown, which we faced more positively than most, treating it as one more adventure and a unique chance to look inside ourselves and our lives, instead of looking ahead and far away as usual. Two months of still – and healthy – life were enough to ignite the spark inside for travel in a world that looked completely different to the way it was just four months before. Since the EU promoted a “reopen” campaign to help member states save their summer tourism, we took the chance to travel to the extreme north of the continent for the very first time in our lives.

Despite the global crisis, we still had the support of our major sponsor. Navarino, who extended their sponsorship of our first trip around the world back in 2007, empowering our expedition again, for which we are extremely grateful. Additionally, a MissionLink satellite system by Thales on the roof of our motorhome is connected to the Iridium Certus network, permitting us to call home or send email from wherever we are on the planet. We truly can’t thank Navarino enough for all their support.

So here we are on the road again while the world is facing a second Covid-19 outbreak. In roughly three months we have crossed ten countries, from eastern Europe to the Baltic sea and from there crossed to the Arctic Circle through a thousand lakes and up to the iconic North Cape in Norway. We can now report that the pandemic has made travel more difficult. But it’s still feasible. 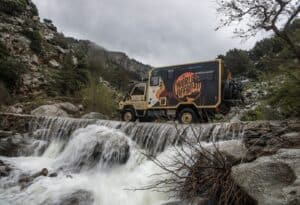 Overland travel seems to be more straightforward because safety measures are mainly focused on airport arrivals, so land border controls are a little bit more loose in the EU area. For example, we were supposed to undergo a 14-day quarantine in Hungary when entering from Romania but at the border they just let us in. When in Poland, we were timely informed that Lithuania would imminently enforce a quarantine rule, so we crossed the border immediately and we skipped it. In the process we learnt to wear masks indoors and avoid busy places.

When we arrived in Finland by ferry from Estonia, police officers let us in. If we had flown directly from Italy or Greece, we would have had to undergo 2-weeks of self-isolation. We actually underwent a 10-day quarantine the time we entered Norway from Lapland, because two days before, the government had enforced the  rule for all visitors from all countries, including neighbouring Finland.

Being in Norway while Covid-19 cases are skyrocketing in the rest of Europe, we can see how complicated travel can be. For example, we can easily enter Sweden from here, but we will be obliged to self-isolate again as soon as we re-enter Norway. Despite all this, or maybe because of all this, it is now like a treasure hunt getting from one country to the other, something which for years we took for granted. Travelling amid this global crisis also transmits a positive message, that we are still free to roam. Ok, with some restrictions. Our only concern is to keep ourselves healthy and not to put others in danger. This is the least we all should do. So, the trip – that life is – goes on for all of us.’ You can follow Akis adventure on his World Offroad Facebook page or at theworldoffroad.com