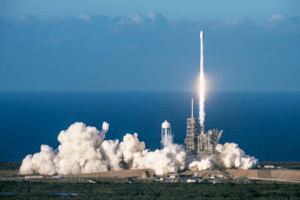 Inmarsat has confirmed the successful launch of the fourth, high-speed broadband communications satellite in its transformational Global Xpress (GX) constellation earlier this year.

I-5 F4 joins the three GX satellites already in orbit, which have, since December 2015, been delivering unprecedented service speeds, global coverage, reliability and security to users on land, at sea and in the air. The fourth satellite adds further capacity to the GX network, as well as in-orbit redundancy that further upgrades the reliability and resilience of Inmarsat’s service offerings.

‘For Inmarsat, reliability and resilience are paramount’ said Rupert Pearce, CEO, Inmarsat. ‘I-5 F4 augments the capabilities of GX and alongside our existing L-Band constellations, enables Inmarsat to provide guaranteed global connectivity to industries and governments worldwide.’