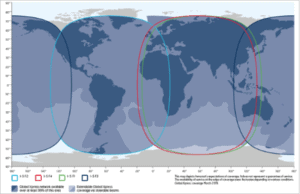 At the end of March this year, Inmarsat’s newest addition to the Global Xpress fleet of satellites became operational, in the IOR West region.

The new I5-F4 satellite joins the three other Global Xpress satellites in geosynchronous orbit around the world:

Like the other fifth generation Inmarsat satellites, I5-F4 was built by Boeing in California as part of Inmarsat’s $1.6 billion investment in the Global Xpress network.

This addition is good news for the maritime sector as the new satellite is expected to help boost the amount of bandwidth available over the very busy Singapore and Mediterranean spot beams. Navarino is the worlds largest Fleet Xpress Value Added Reseller and we welcome this new capacity.