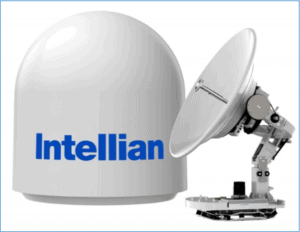 In good news for Navarino’s Intellian customers, both Inmarsat and Intelsat have approved Intellian’s NX series of antennas. Intelsat has certified Intellian’s NX series of products for operation on its High Throughput Satellite (HTS) network. This technology will enable faster connection and higher bandwidth for crew welfare services, operational information and data transfers, plus charterer requirements.

Intelsat has endorsed using marine antennas v85NX and v100NX over its IntelsatOne Flex service that provides connectivity through the EpicNG HTS, its existing fleet of satellites and IntelsatOne terrestrial fibre optics networks.

Both antennas transmit and receive using Ku-band over wide beams and spot beams of high intensity signal. The v85NX has an antenna of 80 cm diameter and the v100NX is a 1-m diameter antenna.

Inmarsat has also approved the Intellian NX series for its Ka-Band Fleet Xpress service. Intellian’s highly efficient next-generation GX100 NX antenna supports 2.5GHz Ka wideband networks out of the box and is supplied with a 5W BUC as standard, with the option to upgrade to a high power 10Q unit. This makes the GX100 NX upgradeable and futureproof for Inmarsat’s next generation high-capacity, high-speed constellation and future network upgrades.

Intellian developed additional automated parts and processes and improved system performance for the NX series. The NX platform’s modular concept contains fewer components, removing the need for spares by up to 40% and increasing reliability, said Intellian.

The South Korean-headquartered company also reduced installation time and costs for shipping companies with the NX series featuring a single cable for power and signal to below-deck terminal equipment. It added a process wizard in the antenna’s AptusNX operating software for simplicity in commissioning and remote maintenance.