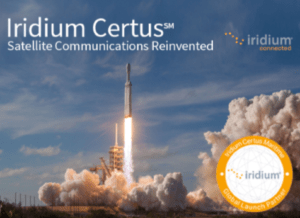 Following the eighth and final launch for Iridium’s historic launch campaign with SpaceX in January, a total of 75 new satellites have been deployed by Iridium in less than two years. The Iridium satellite constellation is the only communications network with pole-to-pole coverage of the entire planet.  It is comprised of six polar orbiting planes, each containing 11 crosslinked satellites totaling 66 in the operational constellation, creating a web of coverage around the Earth.

Since the launches began, the constellation has been undergoing a one-for-one replacement, new satellite for old, achieved through a highly choreographed in-space maneuver known as a ‘slot swap.’

Navarino would like to congratulate Iridium on the successful launch of Certus and we are looking forward to seeing what the world’s latest L-Band service can do!