The 2020 Digitalization Uncovered research report, conducted and carried out by Inmarsat, gives us a deeper insight into the shipping industries primary drivers for adopting digital practices, procedures, and technology. Previously, we have analyzed and discussed how reducing operational costs acts as a primary driver for digitalization, with 71% of the report’s research respondents agreeing that reducing operational costs and creating operational efficiencies was the top priority in the digitalization process. However, second on the list is regulatory compliance and meeting certification requirements, with 60% of respondents agreeing that compliance with regulation and certification requirements was the second key driver for digitalization. 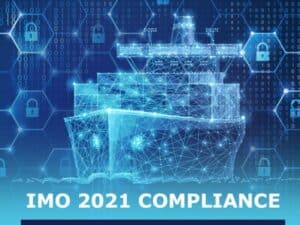 Increasingly, the maritime industry is seeing an overturn in new regulation as more threats are realized as a consequence of the digitalization of maritime. Cyber-attacks such as that on Maersk back in 2018 brought to light the severity that the cyber threat can be and its influence on the maritime industry going forward has ultimately been huge. New policies and regulation, such as the Jan 2021 IMO cyber regulation, represent a drastic shift in mentality for maritime authority bodies, who have realized the cyber potential and stepped up to control it.

This has also meant the introduction of cyber-related products / services from industry service-providers, such as Angel by Navarino – the first cyber security service specifically designed for maritime. Moreover, Navarino’s IT Managed Service, named Quazar, is a service built from top regulatory bodies and systems and thus ensures compliance across the regulatory spectrum; offering protection and conformity to cyber frameworks such as NIST, IASME consortium, ISO and CIS. Products and services such as these represent a digital maturity not seen before by maritime, as they allow for full protection, prevention, and compliance.

Not only has cyber shaped the maritime regulatory environment, but concerns for Maritime’s vast environmental footprint have forced regulatory bodies to consider implementing new regulation which have, and will, change the face of shipping altogether; enabling efficiencies and protecting the maritime blue and green economies. Technologies are being developed to enable compliance to these new regulations, such as the 2020 Sulphur cap. Efficiencies which enable compliance can be developed everywhere and anywhere thanks to digitalization. For example, Waavia 7, an advanced communications tool and part of Navarino’s suite of innovative maritime technology solutions, has augmented reality features which ultimately mean ships no longer have to use up fuel by docking to fix an issue, but can utilize remote services such as telemedicine and live assistance instead. These small yet significant digital adaptions provide shipping companies with the opportunity to contribute to a better maritime environment, save on fuel, and reduce costs.

Differently, Spectrum from Navarino helps to minimize the environmental footprint of a vessels’ IT infrastructure by maximizing the lifespan and utility of onboard equipment thanks to its proactive updates and health monitoring of every IT and OT asset.

Therefore, through digitalization can fleet owners capitalize on both small and large (but both significant) service offerings to enable compliance to regulation. This compliance is for good cause, making shipping safer for vessels, capital, and crew, whilst also encouraging a greener maritime.