Maritime and the Coronavirus

In a twisted way, Maritime is used to the unexpected. The instability of the industry, from trade wars to forever challenging shipping lanes, means the industry has learnt to deal with disruption; hardened and smartened from the many events prior to Covid-19. But this does not mean there will be and are damaging short-term implications.

Covid-19 has had devastating effects across all spheres of life and has drastically changed and haltered many industries. At the epicentre of the outbreak China, the second biggest global economy, has a half-paralyzed logistics industry which is affecting the entire world. Daily charter rates for tankers and bulk freighters have plunged more than 70% since January as China buys less oil, coal, and iron ore.  Because of this we see maritime as one of the biggest industry-related casualties of this virus; according to Alphaliner, more tonnage of container ships is idled around the world now than during the global financial crisis. 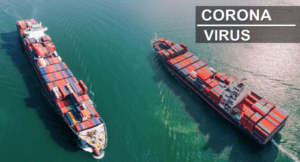 From the epicentre, we see not just the spread of the virus, but the spread of a disrupted global economy. Although now factories in China are running at 50% to 60% of their usual capacity, there is still a huge backlog of factory production to be shipped with insufficient trucking capacity. On top of this, Shipping lines have had trouble replacing crews globally after long voyages since about 1/7th of the seafarers aboard the world’s commercial vessels have Chinese passports. And with the spread of the virus, whilst China begins to stimulate their economy and get back up and running, they will see a slump in demand for their exports because of the worsening epidemic in other countries. For example, Germany who imported $79.9 billion dollars worth of goods in 2019 have now imposed major restrictions on their border. Differently, in the US, where the outbreak is soon to be the new epicentre of the virus might see ports down by 20% on a year-on-year basis compared to 2019. The Port of Los Angeles, for example, handles more containers in a year than any other port in the Western Hemisphere and expects its biggest decline in volume since the financial crisis within these first three months of 2020. Therefore, it’s going to take a while before each state is in a stable position both in terms of the pandemic and their economic systems to begin trade again.

Notwithstanding the impact this will have on people too. Once a pandemic begins or immediately thereafter, the predominant concern shifts to freight distribution. To elaborate, modern day economic activity cannot be sustained without the shipping of food goods, fuel, and other essential resources. However, shipping itself will have to halt; critical supply chains must be fully or partially closed down to prevent spread, leading to food distributors altering their products and services to cope with the forced lack of variety and focus on essential or ‘key’ goods. This has, in many cases, led to societal panic buying.

Additionally, we mustn’t forget the seafarers who in an everyday environment are trapped on their vessels, which now speaks a new meaning. There is an estimated 150,000 crew members on container ships with expired work contracts but have been forced into continued labour aboard these commercial vessels to meet the demands of governments that have closed their borders and yet still want food, fuel, and key resources / supplies. For many crew, each stop at each new port is met with the same response; crew members cannot disembark and have to attempt at the next port, which meets the same result. Maritime organisations such as the International Chamber of Shipping and the International Transport Worker’s Foundation, however, have lobbied the head of the United Nations to exempt seafarers from travel bans and facilitate crew changes, with little success.

What does this all mean for the future of shipping? Well, drawing from the earlier argument that maritime has extended many disruptive events over the last century, we could blanket the virus with a spur of optimism that with the slow but steady containment of the virus in different states allowing essential industries to begin work again, including factors, shipping, and transport. We are already perceiving what weeks of quarantine has done for China – who are now lifting bans on social outings in Wuhan itself.