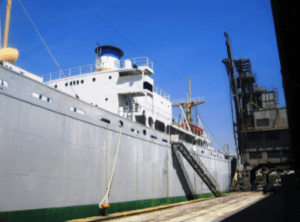 Navarino is proud to be an official supporter of the SS Hellas Liberty, the floating maritime museum in the charming main historical port of Athens, Piraeus.

The ‘Liberty Ships’ are a special class of steam-powered cargo ships constructed during WWII, under the directive to supply the Allied Forces. 2,710 such vessels were built in eighteen shipyards in the US and though they were British in conception, several modifications were adopted in order to make the vessels larger, yet cheaper and easier to build. ‘Liberty Ships’ have become the symbol of the US American wartime industrial output.

Approximately 2.400 ‘Liberty Ships’ survived WWII, and more than 800 of them were used as post-war cargo/merchant ships. Of the remaining vessels, Greek entrepreneurs bought about 525, on favorable terms, as compensation for Greece’s, and their own, heavy wartime casualties in shipping. In fact, some of the most notable shipping magnates, such as Onasis, Niarchos, Livanos and Goulandris, who made the top leagues of world shipping, were known to have started their fleets by buying ‘Liberty Ships’.

Only three ‘Liberty Ships’ survive today in whole: SS John W. Brown, in Norfolk and SS Jeremiah O’Brien, in San Francisco, which are fully operational and used as museum ships and SS Arthur M. Huddell, in Piraeus, which is not operational, but has also been converted to a floating museum, dedicated to the history of the Greek merchant marine.

The 135m long SS Arthur M. Huddell was built by St. John’s River Shipbuilding Company in Jacksonville, Florida, on October 25, 1943 and was launched in early December of the same year. Originally, the ship carried explosives to Europe and in 1944 she was converted to a pipe carrier. After the end of the war, she was laid up until 1956, when converted to a cable laying vessel. After the end of the war, in 1956, Huddell was transferred to the US, where she was used to support cable operations for the Sound Surveillance System (SOSUS), up until 1984. From then on and until 2008, the vessel had been in cold lay-up condition. Eventually, in June 2010, she was presented to the Greek public in her restored form and renamed to SS Hellas Liberty.

Today, SS Hellas Liberty is docked in Piraeus’ main port, right next to the old SILO buildings, on Vasiliadis coast. A visit to this ship-museum offers the visitor the opportunity to familiarize with the evolution of the Greek and indeed global, merchant maritime industry and to travel through history at a time when navigation depended mostly on seafaring skills.