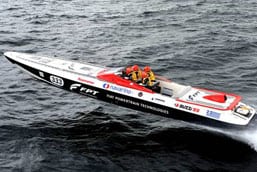 NAVARINO is delighted to announce that the Navarino sponsored Blue FPT powerboat has won the Round Britain Powerboat Race 2008.

The race, held for the first time since 1984, and having previously been run in 1969, ran from June 21st to June 30th with 48 different powerboats from various countries participating. Starting in Portsmouth, England, the route takes competitors 1400 nautical miles around the British Isles over nine days, before returning to Portsmouth for the chequered flag. The race is characterised by the extremely difficult sea conditions that racers face and the grueling schedule that allows little time for rest.

Representing Navarino on board the Greek flagged boat was Commercial Director, Panos Tsikopoulos. who was invited to join Blue FPT as co-driver and throttleman.

Also in the team were Vasilis Pateras, (driver) Lefteris Vasileiou (engineer) and Dag Pike (navigator), who competed in both previous Round Britain Races and was in the winning boat in 1984.

As the race is as much about endurance as it is about speed, reliability was key to the success of the team, as many of the boats that broke down discovered to their cost. By carefully maintaining a high average speed of around 60 knots, Blue FPT took the chequered flag after 20 hours, 36 minutes and 47 seconds without technical incidents and 80 minutes faster than its nearest rival.

On his triumphant return to Greece, and after the award ceremony with Deputy Minister of Merchant Marine Mr. Panos Kammenos, Mr. Tsikopoulos was extremely pleased to have participated so successfully in such a difficult event- The race was one of the most difficult things I have ever done – the weather conditions and the intense concentration needed for so many hours a day meant that we were all very exhausted by the time we passed the finish line. Winning it was amazing though and we are extremely pleased to have done so well. I would like to also thank the organisers, sponsors and other competitors for putting up such a good fight and for contributing to such an unforgettable experience. 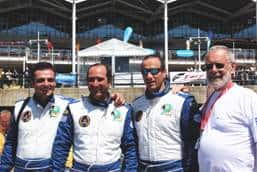