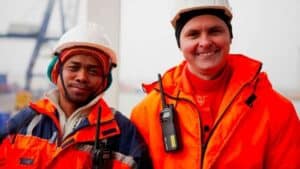 The contemporary economy is seeing an important shift taking place, a shift of focus onto people. Whilst commercial supply chains are typified by an emphasis on numbers, statistics, and money, the modern world is demanding a greater emphasis on people instead, including those that exist within the supply chain. This has prompted the establishment of many organisations that protect groups of people within the supply chain system and within different industries. For maritime, the Seafarers Happiness Index was founded in 2015 with the purpose of monitoring and benchmarking seafarer satisfaction.

Unfortunately, Maritime is not exempt from the human rights abuses that have been uncovered across the last decade over thousands of industries. Flags of convenience, for example, which are ships that fly flags of a country other than its country of ownership, often mean for the seafarers onboard low-wages, poor on-board conditions, and inadequate food and drinking water. Moreover, other common human rights abuses within the shipping industry are:

Thus, the organisations like the Seafarer Happiness Index exists to make life better at sea and promote change to reduce these issues. The Index addresses the most important aspects of seafarer life through asking 10 key questions, placing emphasis on understanding aspects such as mental and physical health, workloads, access to shoreleave, and as the digital age seeps further into the maritime world, connectivity is also highly important. Through anonymity, seafarers allow us to gauge a better and more thorough understanding of what life is really like.

Through the index, the organisation can incentivise improvements to welfare. They urge that “happy, satisfied, well fed, fit and engaged seafarers are less likely to have accidents, they are likely to have long, successful careers and make for a confident and thriving industry”. According to research done by the ICO (UK Information Commissioner’s Office), up to 90% of cyber-attacks are due to human error, thus educated and satisfied workers are highly important in protecting the vessel, its goods, and its seafarers. 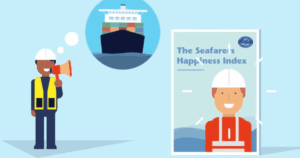 Currently, the index is seeing a continuously fluctuating result, with increases in satisfaction in some aspects such as connectivity, but drops in satisfaction in others, like workload stress and welfare facilities. As data and connectivity becomes more widely available with a plethora of options for captains and their crew, seafarer happiness with their ability to contact loved ones rose in the first quarter of 2020, reflective of the efforts companies such as Navarino put in to promote wider access for seafarers. Differently, the end of 2019 promoted a seasonal slump, as well as a notable drop in seafarer interactions, with issues of racism becoming more prevalent.

These fluctuations enable industry leading organisations to promote industry-wide change; implementing regulations and initiatives to put people at the forefront. By reacting to worker satisfaction, organisations can continuously better the industry, making for a healthier and more competitive maritime economy.